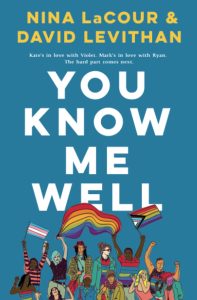 Résumé : Mark and Kate have sat next to each other for an entire year, but have never spoken. For whatever reason, their paths outside of class have never crossed.

That is, until Kate spots Mark miles away from home, out in the city for a wild, unexpected night. Kate is lost, having just run away from a chance to finally meet the girl she has been in love with from afar. Mark, meanwhile, is in love with his best friend Ryan, who may or may not feel the same way.

When Kate and Mark meet up, little do they know how important they will become to each other—and how, in a very short time, they will know each other better than any of the people who are supposed to know them more.

Résumé : Meg and Linus are best friends bound by a shared love of school, a coffee obsession, and being queer. It’s not always easy to be the nerdy lesbian or gay kid in a suburban town. But they have each other. And a few Star Trek boxed sets. They’re pretty happy.

But then Sophia, Meg’s longtime girlfriend, breaks up with Meg. Linus starts tutoring the totally dreamy new kid, Danny—and Meg thinks setting them up is the perfect project to distract herself from her own heartbreak. But Linus isn’t so sure Danny even likes guys, and maybe Sophia isn’t quite as out of the picture as Meg thought she was. . . . 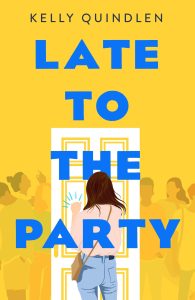 She’s never crashed a party, never stayed out too late. She’s never even been kissed. And it’s not just because she’s gay. It’s because she and her two best friends, Maritza and JaKory, spend more time in her basement watching Netflix than engaging with the outside world.

So when Maritza and JaKory suggest crashing a party, Codi is highly skeptical. Those parties aren’t for kids like them. They’re for cool kids. Straight kids.

But then Codi stumbles upon one of those cool kids, Ricky, kissing another boy in the dark, and an unexpected friendship is formed. In return for never talking about that kiss, Ricky takes Codi under his wing and draws her into a wild summer filled with late nights, new experiences, and one really cute girl named Lydia.

The only problem? Codi never tells Maritza or JaKory about any of it.

Titre : When You Get the Chance de Tom Ryan and Robin Stevenson

Résumé : As kids, Mark and his cousin Talia spent many happy summers together at the family cottage in Ontario, but a fight between their parents put an end to the annual event. Living on opposite coasts — Mark in Halifax and Talia in Victoria — they haven’t seen each other in years. When their grandfather dies unexpectedly, Mark and Talia find themselves reunited at the cottage once again, cleaning it out while the family decides what to do with it.
Mark and Talia are both queer, but they soon realize that’s about all they have in common, other than the fact that they’d both prefer to be in Toronto. Talia is desperate to see her high school sweetheart Erin, who’s barely been in touch since leaving to spend the summer working at a coffee shop in the Gay Village. Mark, on the other hand, is just looking for some fun, and Toronto Pride seems like the perfect place to find it.
When a series of complications throws everything up in the air, Mark and Talia — with Mark’s little sister Paige in tow — decide to hit the road for Toronto. With a bit of luck, and some help from a series of unexpected new friends, they might just make it to the big city and find what they’re looking for. That is, if they can figure out how to start seeing things through each other’s eyes.

Résumé : Wounded and betrayed, after being dumped by her girlfriend, Ally makes off to her dad’s in Sheffield with the one thing that might soothe the pain and force her ex to speak to her again: Emily’s cat, Malcolm.

Back home and forced into a ‘date’ by their parents, Ally and her first ever beard, Jeremy, come up with a ridiculous plan to win their exes back… to revenge-run a half marathon. Given neither of them can run, they enlist the support of athletic, not to mention beautiful, Jo. But will she have them running for the hills… or will their ridiculous plan pay off…?

Résumé : All London Noble wanted out of her senior year of high school was anonymity. The complete opposite of Jasmine, her emotionally unstable baby sister, London has worked hard to stay out of the spotlight.

Then she discovers that Wade, one of the most popular guys in school, is gay like her and their new-found closeness based around their shared secret has half the student body convinced they’re hooking up…and a lot of girls aren’t happy about it. Now she’s been dubbed « Dirty London. » Rumors are flying about her inability to keep her clothes on, and London is pretty sure she’s developing a crush on the one girl who sees through it all.

If she could admit why stealing boyfriends is the last thing on her mind—not to mention find out what’s going on with Jasmine and her rapidly disappearing psych medications—her life would be a much brighter place. But if her and Wade’s truth gets out, and if she doesn’t find a way to help her sister, London faces losing a lot more than her obscurity.