Titre : Buried beneath the baobab tree

Résumé : On April 14, 2014, Boko Haram kidnapped 276 girls. Some managed to escape. Many are still missing. A new pair of shoes, a university degree, a husband—these are the things that a girl dreams of in a Nigerian village. A girl who works hard in school and to help her family. A girl with a future as bright as live coals in the dark. And with a government scholarship right around the corner, everyone—her mother, her five brothers, her best friend, her teachers—can see that these dreams aren’t too far out of reach. Even if the voices on Papa’s radio tell more fearful news than tales to tell by moonlight.

But the girl’s dreams turn to nightmares when her village is attacked by Boko Haram, a terrorist group, in the middle of the night. Kidnapped, she is taken with other girls and women into the forest where she is forced to follow her captors’ radical beliefs and watch as her best friend slowly accepts everything she’s been told. Still, the girl defends her existence. As impossible as escape may seem, her life—her future—is hers to fight for.

Résumé : Sadie hasn’t had an easy life. Growing up on her own, she’s been raising her sister Mattie in an isolated small town, trying her best to provide a normal life and keep their heads above water.

But when Mattie is found dead, Sadie’s entire world crumbles. After a somewhat botched police investigation, Sadie is determined to bring her sister’s killer to justice and hits the road following a few meagre clues to find him.

When West McCray—a radio personality working on a segment about small, forgotten towns in America—overhears Sadie’s story at a local gas station, he becomes obsessed with finding the missing girl. He starts his own podcast as he tracks Sadie’s journey, trying to figure out what happened, hoping to find her before it’s too late.

Titre : Not even bones

Résumé : Nita doesn’t murder supernatural beings and sell their body parts on the internet—her mother does that. Nita just dissects the bodies after they’ve been “acquired.” But when her mom brings home a live specimen, Nita decides she wants out — dissecting living people is a step too far.

But when she tries to save her mother’s victim, she ends up sold on the black market in his place — because Nita herself is a supernatural being. Now Nita is on the other side of the bars, and there is no line she won’t cross to escape and make sure no one can ever capture her again.

Nita did a good deed, and it cost her everything. Now she’s going to do a lot of bad deeds to get it all back.

A criminal mastermind and unrivaled pilot, Ia has spent her life terrorizing the Olympus Commonwealth, the imperialist nation that destroyed her home. When the Commonwealth captures her and her true identity is exposed, they see Ia’s age and talent as an opportunity: by forcing her to serve them, they will prove that no one is beyond their control.

Soon, Ia is trapped at the Commonwealth’s military academy, desperately plotting her escape. But new acquaintances—including Brinn, a seemingly average student with a closely-held secret, and their charming Flight Master, Knives—cause Ia to question her own alliances. Can she find a way to escape the Commonwealth’s clutches before these bonds deepen?

Résumé : Rumi Seto spends a lot of time worrying she doesn’t have the answers to everything. What to eat, where to go, whom to love. But there is one thing she is absolutely sure of—she wants to spend the rest of her life writing music with her younger sister, Lea.

Then Lea dies in a car accident, and her mother sends her away to live with her aunt in Hawaii while she deals with her own grief. Now thousands of miles from home, Rumi struggles to navigate the loss of her sister, being abandoned by her mother, and the absence of music in her life. With the help of the “boys next door”—a teenage surfer named Kai, who smiles too much and doesn’t take anything seriously, and an eighty-year-old named George Watanabe, who succumbed to his own grief years ago—Rumi attempts to find her way back to her music, to write the song she and Lea never had the chance to finish.

Résumé : Zuri Benitez has pride. Brooklyn pride, family pride, and pride in her Afro-Latino roots. But pride might not be enough to save her rapidly gentrifying neighborhood from becoming unrecognizable.

When the wealthy Darcy family moves in across the street, Zuri wants nothing to do with their two teenage sons, even as her older sister, Janae, starts to fall for the charming Ainsley. She especially can’t stand the judgmental and arrogant Darius. Yet as Zuri and Darius are forced to find common ground, their initial dislike shifts into an unexpected understanding.

But with four wild sisters pulling her in different directions, cute boy Warren vying for her attention, and college applications hovering on the horizon, Zuri fights to find her place in Bushwick’s changing landscape, or lose it all.

Titre : A blade so black

Résumé : The first time the Nightmares came, it nearly cost Alice her life. Now she’s trained to battle monstrous creatures in the dark dream realm known as Wonderland with magic weapons and hardcore fighting skills. Yet even warriors have a curfew.

Life in real-world Atlanta isn’t always so simple, as Alice juggles an overprotective mom, a high-maintenance best friend, and a slipping GPA. Keeping the Nightmares at bay is turning into a full-time job. But when Alice’s handsome and mysterious mentor is poisoned, she has to find the antidote by venturing deeper into Wonderland than she’s ever gone before. And she’ll need to use everything she’s learned in both worlds to keep from losing her head . . . literally.

Résumé : Jilly thinks she’s figured out how life works. But when her sister Emma is born Deaf, she realizes how much she still has to learn.

A big fantasy reader, Jilly connects with another fan, Derek, who is a Deaf Black ASL user. She goes to Derek for advice but doesn’t always know the best way to ask for it and makes some mistakes along the way. Jilly has to step back to learn to be an ally, a sister, and a friend, understanding that life works in different ways for different people, and that being open to change can make you change in the best possible ways. 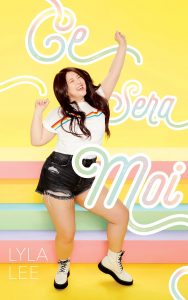